Many DIY and 3D printer designs offer a variety of controller options, and while sourcing the parts for an upcoming CoreXY build myself, I have been weighing the pros and cons of an 8-bit vs. a 32 bit ARM controller.

While the RAMPS/Arduino combo and the MKS GEN 1.4 boards may be seen as “tried and true”, there are a lot of disadvantages and I would strongly encourage anyone undertaking a new build to look at 32 bit controllers instead. Admittedly, the price (often over $100) is a hard pill to swallow, especially in cheaper builds.

If you’re still on the fence, Ryan Carlyle’s answer is the most convincing argument for a 32-bit ARM controller that I’ve heard yet:

3D printer controllers have to do a lot of stuff very, very fast. Performing kinematics and dynamics calculations while sending many thousands of precisely-synchronized step pulses per second is really, really hard. The 8bit AVR line of microcontrollers used in older 3D printer controllers is basically a late-1990s era Mr Coffee processor. They are completely, utterly maxed out on processor time just executing basic printing functions in simple (eg Cartesian) printers, and adding additional calculation load will bog them down and cause slowdowns, stuttering, pausing, and so on.

The advantages of a 32 bit controller can be summed up as follows:

Popular 32-bit control boards include the Duet 2 Wifi and Azteeg X5 GT. I will continue to research those and additional options for my upcoming build.

Our latest recommendation for a good entry-level printer with a 32-Bit motherboard included is the Ender 3 V2. 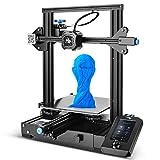 There is an excellent tutorial found here that describes how to replace your old Ender 3 8-bit board with a SKR Mini E3 32-bit replacement board.

This site uses Akismet to reduce spam. Learn how your comment data is processed.